The Goodhome Pegasus is all good

PEGASUS BAR GETS INTO PARTY MODE

The social calendar comes alive in November with plenty of racing action, work functions and more spontaneous get-togethers as the long, sunny days of summer start to show.

Making the most of this time for groups and families alike will be The Good Home Pegasus.

The breezy gastropub occupies a prime position on the shore of Lake Pegasus and with its focus on quality and leisure has fulfilled many of the ambitions long held for the resort-like town just north of Christchurch.

All-day sun, beautiful views and multiple areas for drinks and dining give it an unhurried air, making it the sort of place where the hours just slip by.

The restaurant's owners, Andy and Jess Laloli, intend to bring some lift to the casual vibe over the next couple of months, though, with a series of fun events including whisky tastings, a ladies' night and activities to celebrate the Melbourne and New Zealand cups.

Groups will be especially well catered for at a Stella Artois pop-up venue opening for November and December.

The pop-up site, for groups of up to 100 people, will overlook the lake and have a festive atmosphere backed up by its own private courtyard and the Stella Artois bar.

Smaller groups also have the option of the restaurant's "sports den". Here, dinners can be hosted for up to 20 people, or drinks and nibbles put on for parties of up to 30.

For people heading in to Addington for the New Zealand Cup, a special package is being put together with a full cooked breakfast, glass of bubbly and transport to and from the racecourse for only $40. Seats are limited so get in quick.

At all times, The Good Home Pegasus has a generous array of tap beers on offer. These include classics like Stella Artois, Guinness, Steinlager and Mac's as well as bespoke brews by Panhead, Emersons and Little Creatures.

Add to this cocktails in the sun, whiskies by the fireside and wines to share with friends, and The Good Home Pegasus has that perfect welcoming touch for any occasion, whether it's a casual drink in the afternoon or that big end-of-year bash.

The Good Home Pegasus is open Monday-Friday from 10am and weekends from 8.30am. Visit them at 62 Pegasus Main St, Pegasus. For reservations or more information, call 03 967 6891 or visit thegoodhomepegasus.co.nz.

This Article reproduced from The Press 24 October 2018 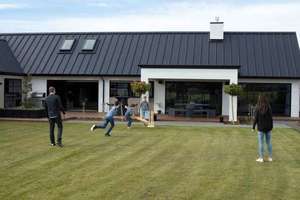 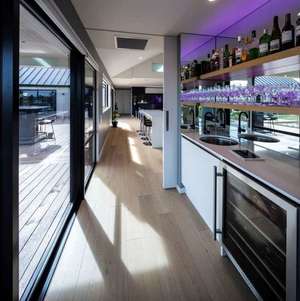 ENTER THE NEWLY BUILT HOME of Don and Jess Francis and be prepared to swoon. The exquisitely spacious sanctum, built on the golf course at Pegasus Town, is set amongst the most breathtaking scenery.

It is the second time the couple has built at Pegasus Town, just north of Christchurch. This time they have built a 380m2 house that features five bedrooms, three lounges, a large kitchen, two bathrooms and an additional toilet. Then there are the laundry room, 25m2 al fresco area and a three-car garage.

Thanks to Don’s expertise, the home was built in just six months as he spent weekends and evenings putting in extra elbow grease. A builder by trade, he’s a director of DNA Structures, a Christchurch-based, boutique architectural design and building company.

“We moved to Pegasus about eight years ago, where we rented for the first four years,” says Jess. “After building our first home, we saw the land on the golf course and snapped it up knowing it was our ideal location.”

With three boys—Conor (12), Luke (9) and Jacob (7), space was high on their list of priorities. “All the boys have their own rooms and we’ve utilised the attic space as a sixth bedroom/rumpus room,” says Don. “It means everyone has their own space and we can use the spare bedroom for any overnight guests.”

“When we’re entertaining, people seem to naturally gravitate to the kitchen so it’s great to have the extra island where people can pull up a pew. We also use the kitchen as an informal dining area for family dinners,” say the couple.

Wooden flooring and the soft tones of a grey and white palate are complemented by three copper-toned circular light fittings that hang from the ceiling. The couple opted for matte black sinks with matching taps rather than the traditional stainless steel. A built-in scullery provides ample storage space and a purpose-built bar with sink and wine fridge sit just around the corner.

Many of the walls in the house have been painted in Resene Stack, a dark grey shade. “People are really drawn to it and we often get asked for the name,” says Jess.
“I also love the drapes we chose for the master bedroom. They’re made from a sheer fabric, so they have a bit of a romantic feel—they’re designed to be longer, so they bunch nicely on the floor.”

The two bathrooms are fully tiled in a gloss marble, with the ensuite featuring a modern stone bath. “The ‘Powder Room’ or additional bathroom is a little more blingy,” says Jess. “We’ve used a raised copper wallpaper and other copper accents.”

Don has been involved with the build of around twenty homes at Pegasus and he is passionate about guiding people through the process. “We pride ourselves on building homes of impeccable quality and we have our own craftsmen. This means we can closely monitor the quality and standard of the finish in our homes.”

Since moving to Pegasus, Jess’s parents have followed suit. “Having them close by is wonderful,” she says. “We’re able to spend time together, share more family dinners and the boys are nice and close to their grandparents.”

“Pegasus is a really short drive from Christchurch, so if we’re looking to head into the city for the night, we’re lucky to be able to call on my parents to babysit.” Their three boys attend school in Rangiora and both Don and Jess work in Christchurch so neither see the drive as a ‘commute’.

In addition to their al fresco area, Don and Jess also have a 150m2 landscaped yard. They’ve opted for an easy-care area with an automatic irrigation system and Kwila decking.

“We love the lifestyle at Pegasus Town and the opportunity to build on such a prime space has been amazing. It’s exciting to see the growth of the town and we expect to see more retail and business development as more homes are built.” 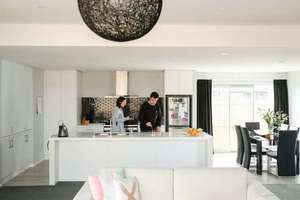 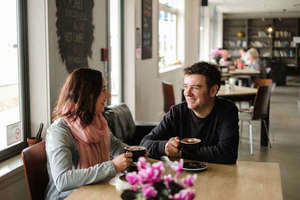 AIDEN BERRY AND AMY TONEYCLIFFE are living the dream. As a young couple in their early thirties, they’re comfortably ensconced in a brand new, purpose-built home with the beach right on their doorstep. They are surrounded by a vibrant community of like-minded individuals who have all chosen to forego city living.

The couple who are planning to marry next March, designed and built their home two years ago at Pegasus Town, just 32 kilometres north of Christchurch. They bought the section while living in Addington, but decided not to rush into building before they had thoroughly researched and agreed upon what they wanted to build.

Aiden and Amy chose their 400 square metre section at Pegasus carefully. While they wanted ample indoor space, their preference for a low maintenance garden and outdoor deck meant they could purchase a smaller section. Neither wanted to spend their weekends trying to maintain a large garden.

For the couple, moving to Pegasus Town was a natural progression. Aiden, who is the Club Operations Manager at Pegasus Golf Club had been in the job for eight years and had developed some well-established friendships. Amy works in Christchurch as an Executive Assistant and had become familiar with the people, culture and amenities through Aiden.

The couple were both used to the hustle and bustle of city life before they built at Pegasus. They were living in a small townhouse in Addington and Amy, who is originally from Ashburton, had spent time living and working in Melbourne. Originally from Yorkshire, Aiden had been spending his days working at Pegasus and commuting back to the city in the evenings.

While they enjoyed living in Christchurch, the move to Pegasus has quite literally been life-changing.

At the same time, they’re reaping the benefits of a great social life, both at Pegasus and in Christchurch. Whether it’s playing a few rounds of golf and listening to a band at the club afterwards or heading into the city for a night out; Pegasus offers the couple the best of both worlds.

The home itself features three bedrooms with an en-suite bathroom off the master bedroom, an additional bathroom and separate toilet. The open-plan living, dining and kitchen area has been carefully designed with sliding doors that open up the corner of the room on to a deck. A large kitchen allows plenty of room for cooking and entertaining.

“We really enjoyed the design and building process,” says Aiden. “Amy did a lot of research online into similar shaped sections and some of the other residents were able to provide tips, having gone through the process themselves. We could do pretty much what we wanted with the section, which was a lot of fun.”

In considering the design, they spent time ensuring that the layout would best capture the sun in the right places at the right time of day. “We allowed plenty of time for preparation and didn’t rush into any big decisions. It was our chance to build exactly what we wanted. The build was a really exciting period; to see it all coming together, taking photos of the progress and preparing to move in.”

Because the home was much larger than their Addington townhouse, they also needed to purchase more furniture. Planning the décor and interior colour schemes helped the couple ensure they created a flow through the house. And while many new builds can be a stressful process, Amy and Aiden’s experience was the opposite.

“There were a few times when I needed to make some quick decisions, but that’s about as stressful as it got,” says Aiden. “When the plans were finalised, we didn’t make any changes at all. We had reached the point where we knew exactly what we wanted and we weren’t deviating from that.”

The lifestyle at Pegasus Town is one they would highly recommend. “There’s quite a few other young couples who have chosen the same route as us,” says Aiden, “and the social life is great. You end up meeting a great group of people and making some really solid friendships.”

For Amy, despite her friendships being less well-established than Aiden’s, she found the transition from Christchurch seamless. “Everyone is very welcoming and it’s amazing just how much is on offer, right on our doorstep.”

Aiden and Amy’s ideal weekend at Pegasus involves a walk around the lake, checking out some of the new builds for ideas and inspiration and a leisurely coffee at the local café. “We haven’t missed Christchurch at all and we love the outdoors. It’s a five-minute walk to the beach and we definitely make the most of that in the summer. The golf course, gym, tennis courts and walking tracks are fantastic—there’s nothing quite like it.”

They’re also finding the location handy for weekend excursions. “When we were living in Addington, we never really went too far away from home, but now we head off to Hanmer (about an hour away) and explore the nearby wineries,” says Amy. “Moving to Pegasus has opened us up to doing new things.”

With summer just around the corner, the couple is looking forward to completing their landscaped garden. “It’s definitely our turn to invite everyone around,” says Aiden, “as we’ve been very welcomed and entertained by the community. We’re really looking forward to being able to return the hospitality.”

Both the move to Pegasus Town and the build of their own home is something the couple would recommend to other young professionals looking at their lifestyle options. It’s a choice that has enabled them to retain their city connections, build new friendships and design a home that ticks all the boxes.